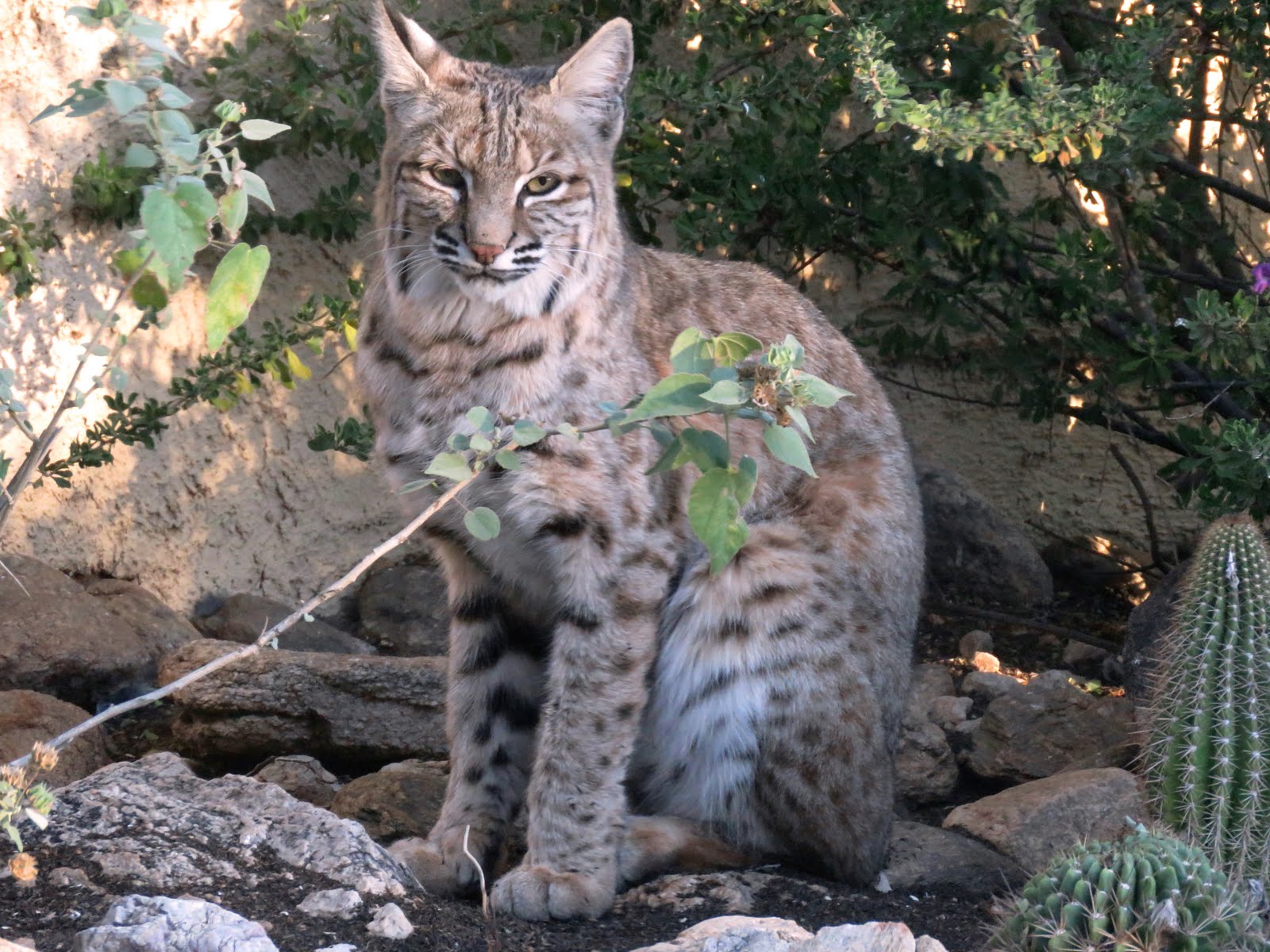 Of course it can get very hot in the desert but all the animals are designed to handle it. Most of the birds will pant with an open beak to cool down. This young Coopers Hawk hid out in the shade of a Mesquite Tree during the heat of the day. 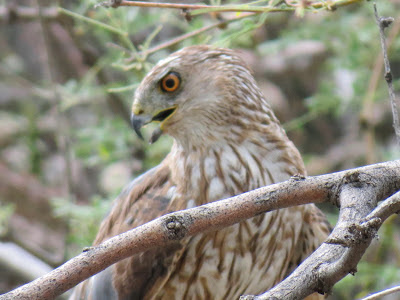 The Cactus Wrens don't seem to slow down when the temperatures rise, they continue to scold anyone and everyone! 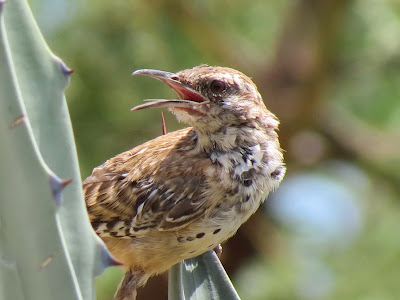 The Roadrunner whiles away the hottest hours under the shade of our car port with all his feathers fluffed up to assist with cooling. 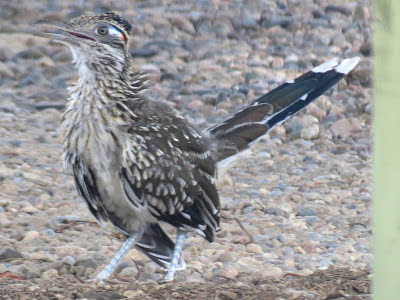 But the winner for chilling out and enjoying a siesta is this sweet little Antelope Squirrel who carefully dug himself a hole in the soil, just deep enough to get down to the moist earth, under the shade of a tree. 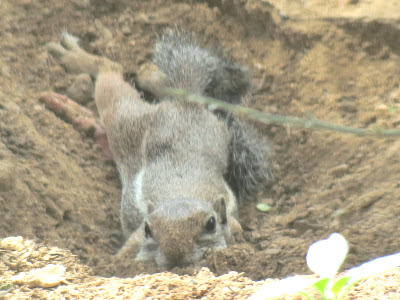 Where he sprawled out with his belly touching as much of the damp soil as possible and dreamed away the hours. Do you notice something next to him? 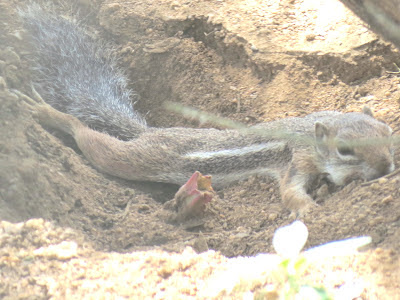 Well being a highly organised little guy, he had even remembered to bring along a snack so he didn't have to go out into the sun when he got peckish. He has definitely got things well sussed out! 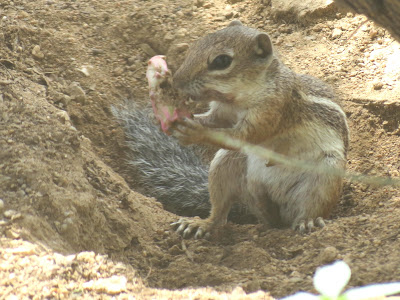 I was sitting outside having eaten dinner, the evening was warm and humid and the crickets were chirping whilst the bats flitted overhead. As is my habit, I took my Maglite to see if I could spot any nocturnal visitors going about their evening business. 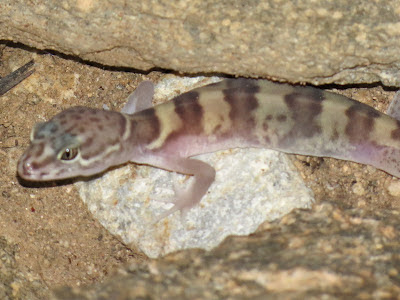 The Arizona Blonde Tarantula was in her usual spot under the Prickly Pear, a Tailless Whip Scorpion was just sidling under the gate and then I noticed this little treasure hunting amongst the rocks. I love geckos! This little Western Banded Gecko was enchanting. No sooner had I spotted this one, which was my first ever in Arizona when a few feet away I noticed another smaller one. 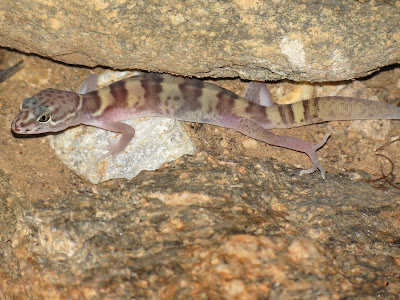 I wondered why it was I had never noticed these beautiful little characters before so I did a little research and discovered that they, rather like the Gila Monsters, spend very little time above ground and they have a very narrow temperature and humidity window that sparks their above ground jaunts, which made this particular sighting all that much more special.
Posted by Celeste at 3:43 pm No comments: 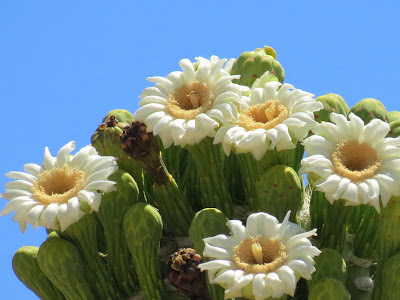 I seem to write endless posts about the majestic Saguaros but they are such magnificent desert monuments it would be hard not to. I posted recently about this years abundant crop of Saguaro flowers which provide food to a vast array of insects, birds and mammals. 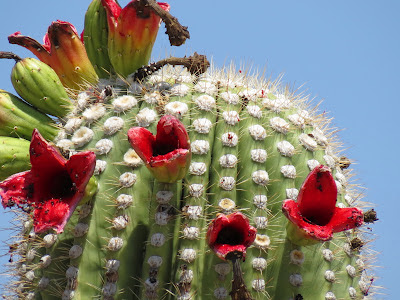 Now the flowers have withered away and the equally precious fruits provide more sustenance to the desert inhabitants. 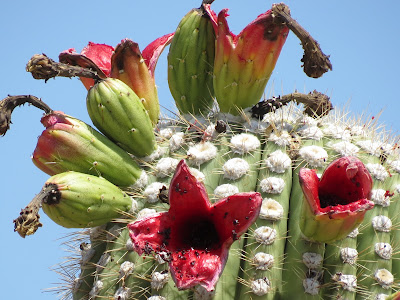 The bulging pods burst open to reveal their luscious red interior in their star shaped splendour. 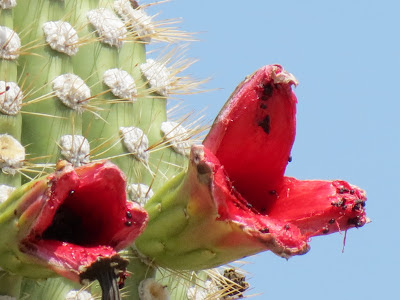 And the harvest from the mighty Saguaro continues to sustain many through the harsh desert summer.

Posted by Celeste at 4:47 pm No comments:

So Hard to be Impartial!

I have observed the cycle of life in many permutations, having lived in Africa for ten years I know first hand that nature is a harsh mistress where you have to fight hard just to survive and I have certainly seen endless creatures killed and eaten by other creatures. But that doesn't stop some kills being harder to come to terms with than others. 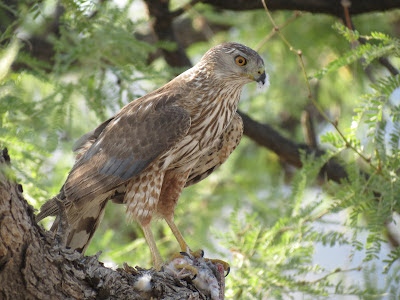 I was happy to watch this young Coopers Hawk feasting on a hard earned meal whilst perching low in a tree at the front of the house. Like many predators raptors tread a fine line between success and starvation. 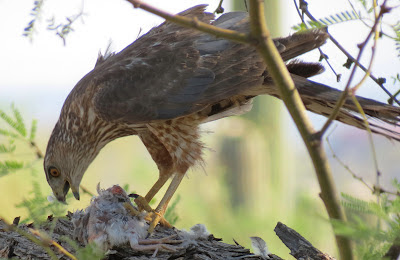 Many young predators never hone their hunting skills quickly enough after leaving the care of their parents and perish during their first year of independence. 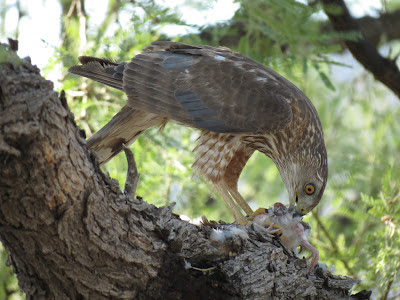 But this young hawk had killed successfully and was tucking into his meal with great relish so I was careful to make sure that I didn't disturb him by getting too close and scare him into dropping his food. 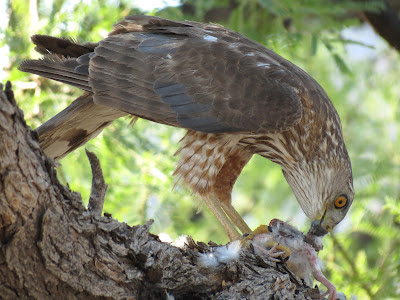 Thank goodness for the joys of modern technology and cameras with massive zoom capacity :) 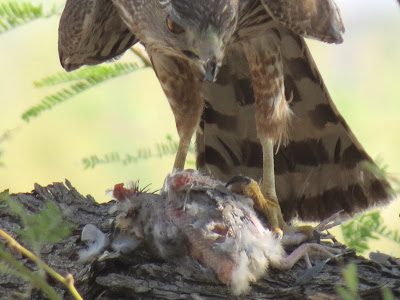 So it wasn't until I was putting the images onto my computer that I actually got the chance to look at what he was eating. I had assumed that it was one of the numerous doves or quail that breed so profusely that they seem to be a food source for everyone and still maintain a massive population but no. Look at those feet and that hooked beak. This was another bird of preys chick! I have a bad feeling that this bad old Coopers Hawk might have raided my beautiful resident Kestrels nest and that makes me so sad. I know, I know, I shouldn't discriminate between Doves, Quails and Kestrels but somehow it just took the edge off my enjoyment of watching nature take it's course. 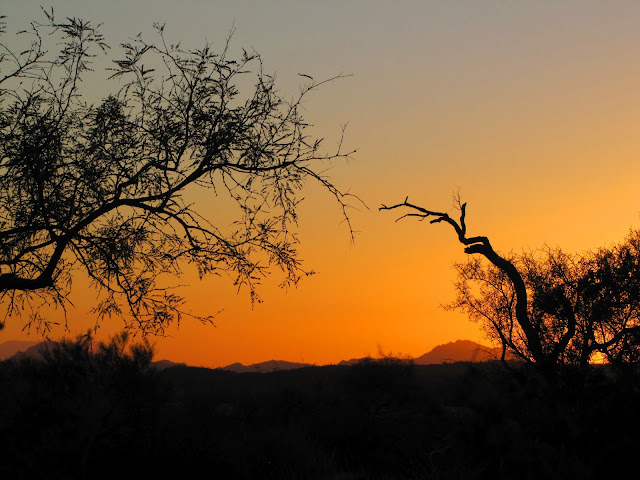 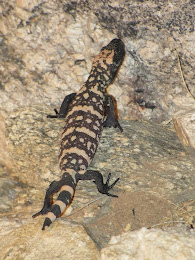 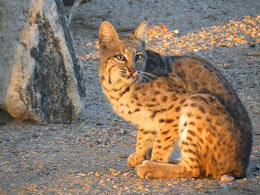 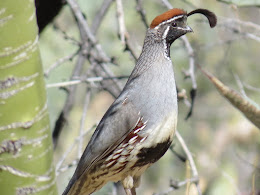 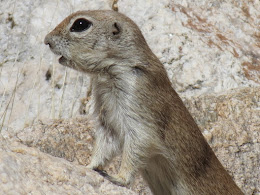